A Very Merry Unbirthday To You

Today, Eleanor and Steven are NOT a year old. 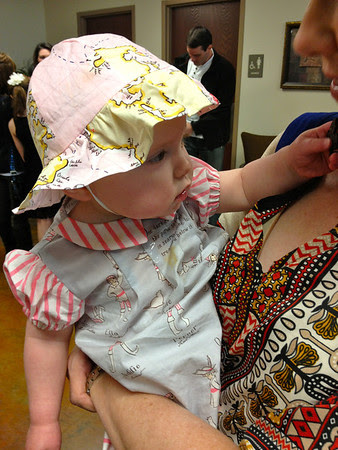 And I couldn't be happier about that. 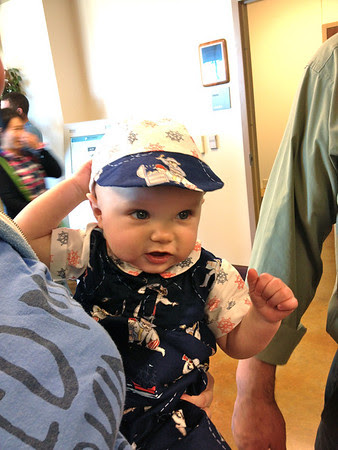 One year ago, Steven got into a little bit of a rush and decided to try to come meet us a little too early. We went to the hospital, and spent a long night (and day? and maybe another night? It all runs together and I don't remember it very well) thinking we'd be greeting some very premature babies soon.

Fortunately, at the very last minute, after I'd been prepped for a C section (epidural and everything!)... it stopped. All of the frantic activity slowed down, the medicines they were giving me took effect, and labor stopped. I was taken to a room I'd call my home for the next 7 weeks (and we did manage to make it pretty homey in all that time - it took us several cart-trips to get all my stuff out to the car when I finally left), and we waited.

There were a couple of other scares during that time, and a lot of "if *this* happens, it'll be bad and we'll have to go to surgery," and "ok, *this* happened, but we'll wait and see if *that* happens," and "well, *that* happened, but we're going to watch for *the other thing*." But February 19th was the admission date on my hospital bracelet, and is the day I'll always remember as the Unbirthday.

So today, we took cookies to all the doctors and nurses who helped us that day, and I wish I had time to bake enough cookies for all the family and friends who camped out in the waiting room that night - I may or may not have gotten to see you, but I knew you were there and I'll always appreciate it and love you for it.


Do a little something to celebrate YOUR unbirthday today. Unless you're my grandma, and it's your actual birthday, in which case, celebrate that too!

Yesterday, we stopped at a coffee shop on our way to hang out at my mom's house for a while, and Eleanor started playing peekaboo with another lady in line. She's always loved playing peekaboo, but that was the first time I know of that she's initiated it on her own - she had the lady totally wrapped around her little finger by the time we left. 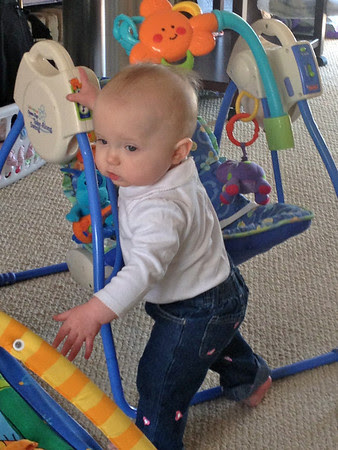 And then yesterday evening, we were all playing in my parents' living room, and Steven and Eleanor were standing at their big ottoman (a great height for them to hang on to and stand), and Eleanor started playing peekaboo with me - she'd crouch down to hide behind it, then jump up. We were all having fun and clapping and saying "Yay!" - that's when it happened... she crouched down, then popped back up with her hands in the air over her head! She's stood on her own a couple of times before, but generally not when she's actually trying to - when she notices she's doing it, she grabs for whatever it was she was holding on to before. Last night was the first time she did it by herself, and she was so excited!

I'm loving watching them become more independent and mobile. Steven is actually pretty mobile now, but doesn't really seem to realize it. When he tries to crawl, he only goes backwards, so he gets frustrated, but he's actually really good at scooting around in a sort of half-sit, half-crawl position to get where he needs to be. I still think he's going to skip crawling and go straight to walking - he did a hilarious little thing the other day where he got his legs straight, and his butt straight up in the air, and his arms straight, in a sort of downward-facing dog... then started walking his hands back toward his feet. Really, if he'd just straightened up right then, he'd have been standing, but he just sort of looked at me when he got there like, "How did I get into this position, and how do I get out?" 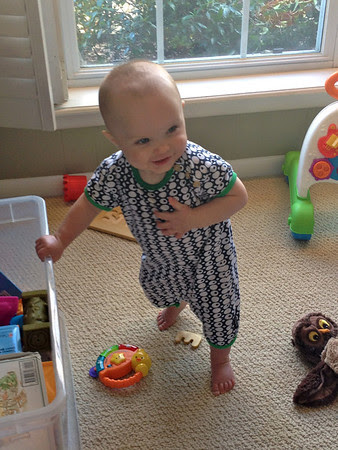 He's really good at standing supported, though, and is getting really confident with pulling himself up and moving from sitting to laying and back again.

We had a fun shakeup at church last week - the power was out in the whole area, so someone found a generator for the sound system and we moved the whole service outside into the driveway. I think all the kids enjoyed being able to take part in the whole service (I usually bring them in for communion on those weeks, but otherwise they're in the nursery), and it was sort of a fun, slightly rowdy atmosphere. 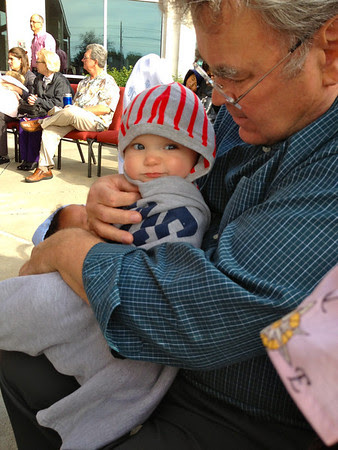 It was a little chilly, but everyone distributed whatever blankets they had in their cars, and we found hats for the kids, and it ended up being really neat. 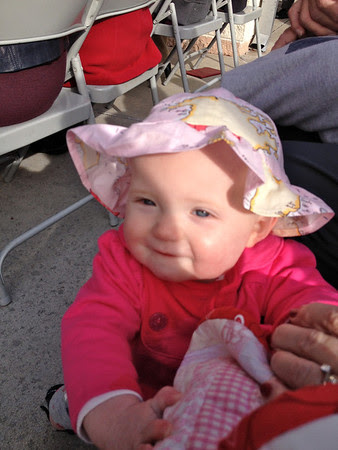 Posted by Bonnie at 8:26 AM No comments:

Susanna took these yesterday - she calls it "A lesson in physics and psychology."

Ok, yeah, this one's pretty boring for anyone but the grandparents. But they were being cute with the chatter this morning while they played, so I took a video.


And don't miss Steven dropping the toy and picking it back up - coordination, baby!
Posted by Bonnie at 8:41 AM No comments:

It's so much fun watching my babies turn into little people. They're bursting with personality, learning more and more independence, and exploring everything in the world around them. 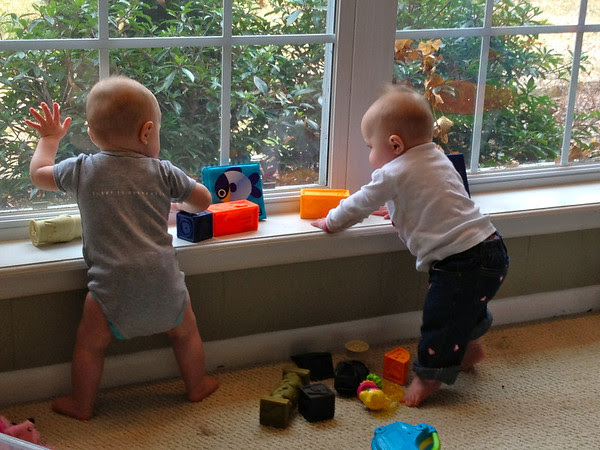 I rearranged my office/playroom so that we can open the shutters to the big window, and now it's their favorite place to play. They love to look out and watch the cats and squirrels, and got a big surprise one day when Grandma came up to wave hi before she came in. 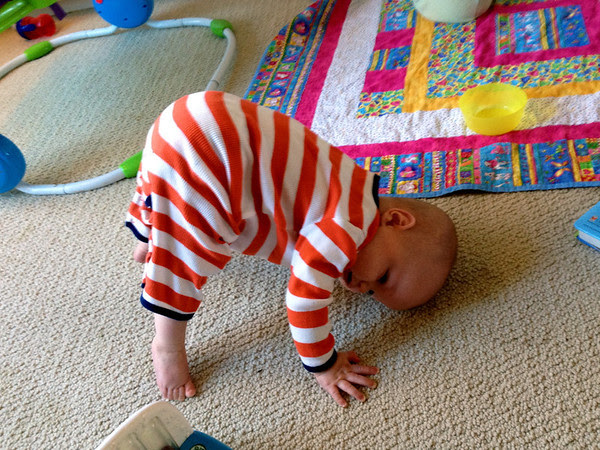 Steven loves to stand at the window or a toy and play, and is getting to be a lot more mobile, but still needs some practice to get the hang of crawling. He may actually walk before he crawls... he seems to have the hang of "one foot in front of the other" better than Eleanor does, when he does practice walking, and doesn't seem all that interested in getting around any other way. 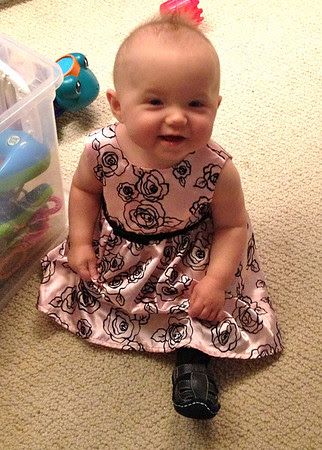 Eleanor, though, is ALL over the place. In fact, right this instant, she's attempting to scale my chair. She's funny, because she's very adventurous but also very careful. She wants to get into everything and do everything and go everywhere, but she's also very cautious about where she puts her feet or how she positions herself to sit down from standing. She's only toppled over once or twice, even with all her crazy climbing, and she's the most resilient kid ever - just picks herself up and dusts herself off and tries it again. 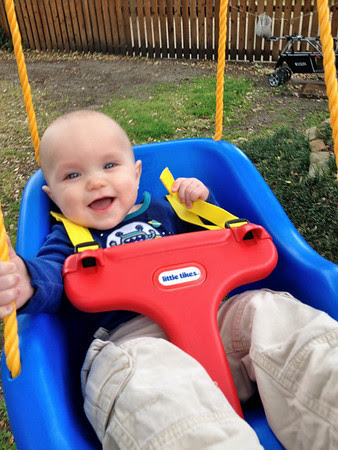 One of the reasons we loved our house when we bought it is the giant oak tree in the back. Our house is surrounded by trees, and that one's our favorite. It's absolutely majestic. And there's one branch that's just perfectly situated for a tree swing, with two hooks already screwed into it that are just right. So we went and got a swing, and got it hung this week. It's been pretty chilly since we put it up, but there have been a few warm afternoons. 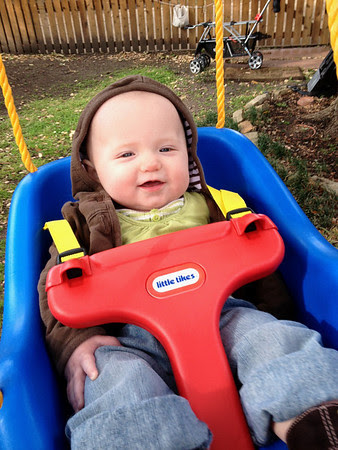 They really like it - I thought about getting a second one, but I kind of like just having one for now. We can take one out if the other is napping, for some fun one-on-one time, and we have a nice little square of concrete for a patio where we'll be able to put outside toys, so once we have some little tricycles and things, they'll be able to play or swing on different toys if they want to.
Posted by Bonnie at 8:46 AM 1 comment: