I suppose, to them, it's not really any different from any other day, but yesterday was the first really rainy day since the babies have been home. We've been getting out a lot, running errands and things, but yesterday we just stayed home and relaxed. It was really nice and quiet. Eleanor played on their play mat for a while - she's getting more and more aware of the hanging toys, and likes to kick and grab at them, and try to lick them. (Which reminds me, I should pick up some Lysol. Because...) Toys aren't the only things she tries to lick - I let the dogs in, and turned my back for one second when I thought Miles was under my desk, and when I turned back around, Miles was licking Eleanor and she was trying desperately to lick him. I guess it was bound to happen some time. I probably should have grabbed the camera... Miles, obviously, thinks the babies are pretty cool. Sadie's more skeptical, but is starting to warm up. The first week, she would run away any time we brought them near her, but in the last few days, she's come up close to check them out a few times. I think that baby-head smell is winning her over. Right now, we're just hanging out on the bed in our jammies while Steven alternately falls asleep and wakes up to hit Eleanor. He's a very happy sleeper - always smiling.
Posted by Bonnie at 9:08 AM No comments:

The nursery is almost done - everything's put together except the window treatment, and that's on its way. I love it - so light and sweet.

A tour of the room, counterclockwise: 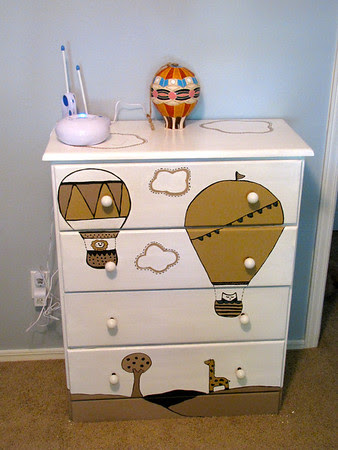 Just to the right of the door, as you walk in, is the dresser - incredible painting courtesy of Curbside Creations (more great photos at the link), with a yet-to-be-hung ceramic hot air balloon that my parents brought from either Prague or Budapest (I can't remember which). 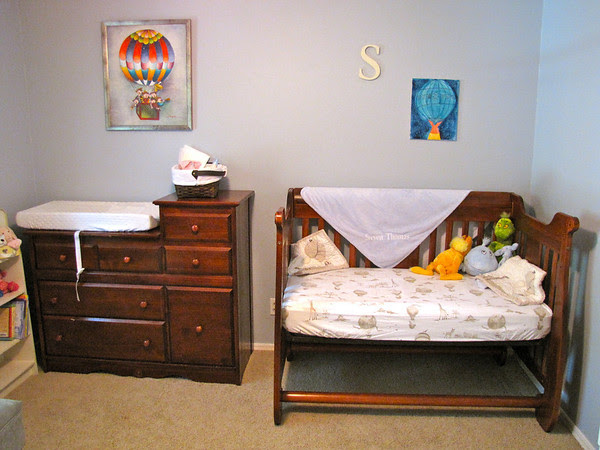 On the next wall, we have Steven's crib, currently more of a stuffed-animal storage space, with artwork by my sister - and I LOVE the pottery barn kids crib set with the animals in hot air balloons (are you noticing the theme yet?)

A closeup of the artwork: 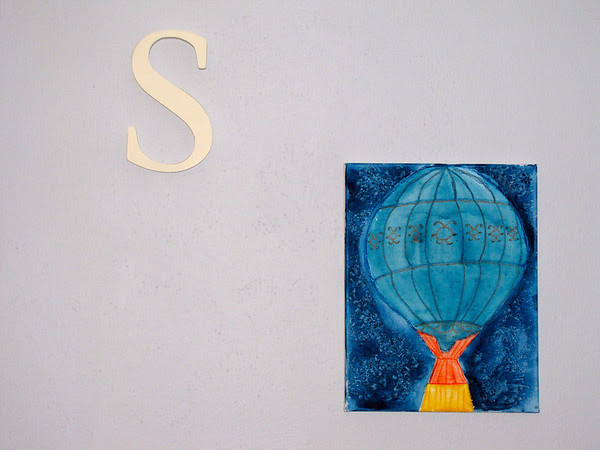 This isn't just A hot air balloon, it's the balloon TARDIS from the Doctor Who Christmas special "The Next Doctor." Because my sister is awesome like that. 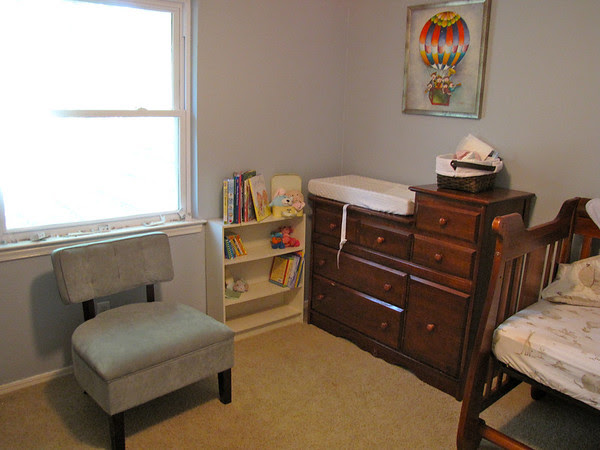 From there, we have the changing table (with great vintage artwork from friends), a kid-sized bookshelf I painted to hold books and toys, and a comfy chair we bought for my study originally - it ended up being the perfect size and color for the nursery.

The view out this window is amazing - it was a big selling point of the house for me. The window looks out over our cottage-y looking roof, a BIG oak tree, and the back yard. 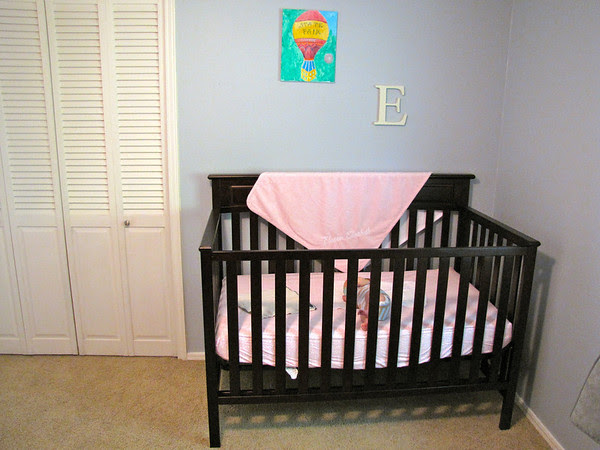 The last wall has Eleanor's crib, with more great art from my sister: 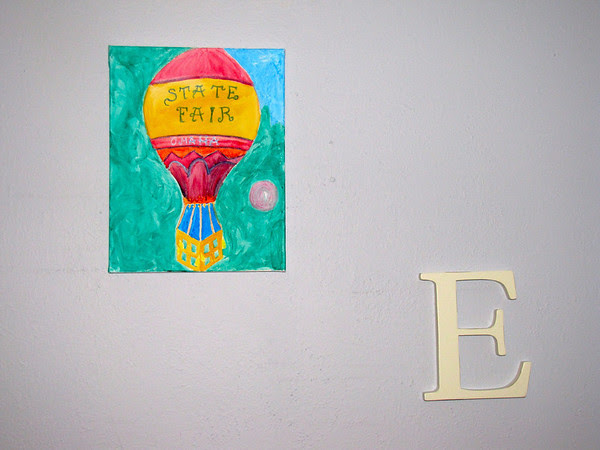 This one is the balloon from The Wizard of Oz, my very favorite movie. These kids have a talented aunt!
Posted by Bonnie at 6:07 PM 2 comments:

What a special Mother's Day! I've waited a LONG time to celebrate from this side of things, and I couldn't have imagined or asked for a more wonderful family. The twins are exhausted now from a long day of church, lunch with my family, and visiting with their other grandparents. So many people who love them!

It seems like the babies have been growing like crazy. Eleanor's cheeks get chubbier by the day, and Steven's little hands and knees have dimples where they didn't before. Steven has grown out of Preemie sized clothes and is now in Newborn - I don't think Eleanor will be far behind. They're both spending more and more time awake... unfortunately, it mostly seems to be at night right now. Bedtime baths seem to help, so that's becoming part of the nightly routine.

I read their first book to them today; my friends hosted a shower for them last weekend and everyone brought books, so they have a very nice library now. I figure starting them now on Dr. Seuss is definitely a good thing.
Posted by Bonnie at 6:59 PM 1 comment:

Chris took a video last night of the babies interacting... I didn't realize he wasn't just taking stills, so there are some flashes from my camera. They each seem to think the other is for eating...
Posted by Bonnie at 10:58 AM No comments:

I'm sitting in the bedroom with both the babies, listening to them sleep the sleep of happy clean babies after a bath. They're doing one of those funny "twin" things, where they keep breathing together, even though they're across the room from each other.
I didn't totally believe in the "twin" things before they came, and figured even if they were real, ours wouldn't do them since they're fraternal and different genders - I was wrong. It's so funny getting to know them - in so many ways, they're such completely different little people, but sometimes they act like they're on some different wavelength that we can't understand.
The day that Steven was first supposed to come home from the hospital, we were busy setting up the nursery and changing table, and organizing clothes and blankets, when we got a call from their doctor. She said he'd need to stay another 5 days at least, because early that morning, both their alarms had gone off, indicating that they'd had a Brady episode (a common thing in preemies, when they forget to breathe and their heart rate drops). The strange thing was, they'd both done it at the exact same second. She swore it couldn't be a monitor malfunction - she'd looked at the readings herself and they were real.
They haven't done anything quite so dramatic since then, but occasionally I'll look from one to the other and see that they're sleeping in exactly the same odd position (once they each had one hand on their cheek and one fist up in the air), or they'll start fussing together - not one after the other, but together. The funniest is when they "talk" - they both make these funny sounds that sometimes sound like laughing, or dolphins, or (usually) goats, and they'll do them back and forth to each other like they're talking. I love it.
As for how they're different so far, Steven tends to be very physical - always moving, always waving his hands around (he tends to knock his pacifier out of his mouth more often than not - I think he's trying to help keep it in, but doesn't have the coordination yet). When he gets hungry, watch out - he'll try to eat anything around him, including noses and fingers. He acts very angry when he's hungry, with little growling noises.
Eleanor is usually much calmer - if we give her her pacifier and put her hand on it, she'll usually keep her hand still enough to keep the pacifier in for quite a while. She has quite a bit more hair - after a bath (like today), we think she looks a bit like a baby monkey - you know when you see pictures of baby monkeys with their mothers, looking like they just woke up, with their fine baby hair going in all directions? She looks kind of like that after we dry her off.
It's wonderful watching them grow and change every day, and learning more about their individual personalities. I can't wait to see what's in store.
Posted by Bonnie at 11:08 AM 1 comment: