Steven and Eleanor lost their great-uncle Rex this weekend. They were fortunate to get to meet him at Christmas and to get to spend some time with him. 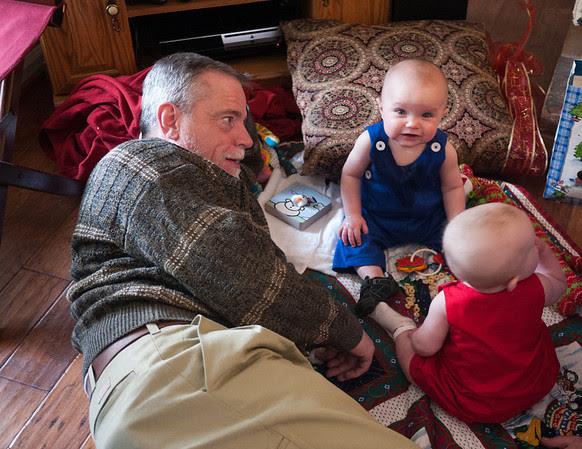 Rex was a very tenderhearted, sweet man - if there was one solid, unshakeable thing in his life, it was his love for his family. He wouldn't think twice before giving his nephews the metaphorical shirt off his back (or, once, the literal shoes off his feet). 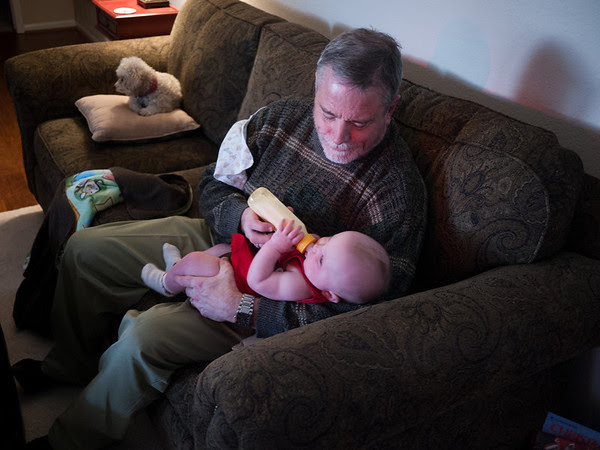 He was so thrilled to spend time with his great-nephews and great-niece at Christmas, and I'm so glad we have these memories of him to share with them.
Posted by Bonnie at 9:52 AM No comments:

Entering the Wide World of Food

We're having so much fun these days with lunch and dinner time (I haven't really gotten my act together enough yet to do more than bottles for breakfast - mama needs her coffee before she can be that organized). Steven and Eleanor are at a very adventurous stage, where they'll try anything once, and almost always ask for more. 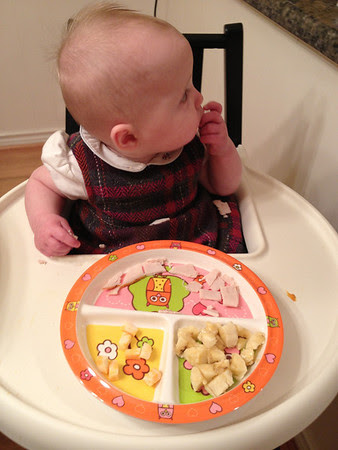 We do occasionally do jarred food or packets of baby food, since they're a quick protein when I don't have anything baby-friendly on hand and are convenient to throw in the diaper bag, but for the most part, they just eat cut-up softish foods. Steven still doesn't have teeth, but he does just fine gumming most things.

Some particular favorites (of mine, because they're easy, and of theirs) are deli turkey, cheese cubes, bananas, applesauce, bran muffins, and sweet potato puffs.

I'm not a big stickler for waiting to give them sugar - I'm more a fan of letting them try at least a taste of whatever I'm having, within reason. So they've gotten tastes of cookies, crepes, and coconut-milk ice cream.

I really like the freezer microwave-steam packs of veggies... so far broccoli is, well, not a hit exactly, but tolerable, and a brown rice/broccoli/carrot mix was pretty popular. Green beans were not received well, but I guess you win some, you lose some. Steven was much happier with the taste of my guacamole I gave him shortly after.

It's funny - Steven looks so skeptical in a lot of the pictures I have of them eating, but in reality, he's the more enthusiastic eater. He'll polish off everything on his plate and start reaching for hers or signing for more (his own sign he came up with) or just banging on his tray.

I'm having fun cooking for them - I'd love to have more ideas for options!
Posted by Bonnie at 1:19 PM No comments:

This is a very short video, but I love what it means. It's the first time one of my kids has realized that what's on the page of a book represents something in the world. They're read to a LOT, and generally seem to like the rhythm of the story and want to eat the pages, but haven't previously seemed to have much awareness that the images and words on a page mean something. Today, while my mom was reading Pat the Bunny to Eleanor, she got it. She looked in the little mirror, and touched the daddy's scratchy beard, and laughed at the boy playing peekaboo, because she seemed to suddenly realize that the game he was playing in the book is the same game she loves to play with us, and that the things Grandma was saying were related to the things in the book.

I'm pretty sure there will never be a point in my life at which this video will not make me happy.

I'll tell you what - these kids just get sweeter and more fun every single day. Even today, we're taking it easy, because we've had a cold making its way around the family, and Steven has a double ear infection, but he's the sweetest, most cheerful little patient you ever met. 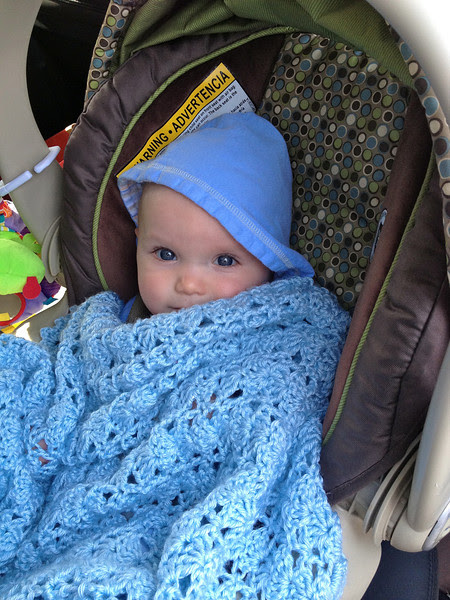 In fact, I wasn't even sure whether to take him to the doctor, because I was waiting for some droopiness or crankiness, and he just never has acted out of sorts at all. Right now, he and Eleanor are playing some sort of keep-away game they're making up with a set of stacking cups. Frequently, these games end up with one of them sitting on the other... 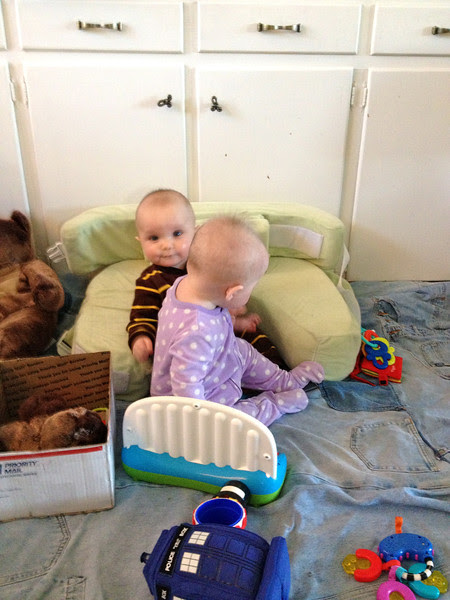 They had a wonderful Christmas. Eleanor pulled up to standing by herself for the first time on Christmas day! 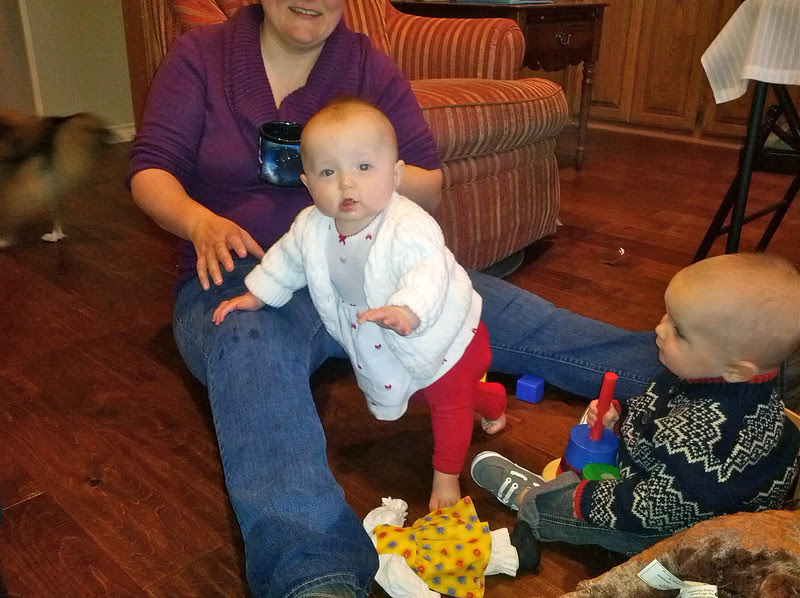 Our playroom is so well stocked now, although of course Eleanor only wants to play with dog toys and power cords. It doesn't matter how many toys are out, she'll make a beeline for whatever the dogs have brought in. She's certainly adventurous - she loves to climb on anything she can, so I've been trying to make sure everything she has access to is safe and anchored.


Steven seems to have a real ear for music. He and Aunt Abbey like to play a pitch-matching game, where she sings and he tries to sing the note back to her, and he loves to dance along with music. Right now, we're watching Mary Poppins, and he's dancing along to the "Step In Time" chimney-sweep song. Both kids love all the musical toys they got for Christmas - a toy piano and tambourine, in particular, are huge hits.

I've started thinking about ideas for their birthday party - I can't believe they'll be 9 months old tomorrow!
Posted by Bonnie at 9:55 AM 1 comment: